The historical special Sehnsucht 2020 – City and Desire is presented by Ö1.

The 22 films in Sehnsucht 2020 – City and Desire – a joint special by Diagonale, Filmarchiv Austria, the Austrian Film Museum, and the ORF Archive – revolve around the key words city and desire in Austrian film.

The films in the Diagonale’s historical special lead to sites that make the interplay of built and lived city comprehensible – from public housing in Red Vienna to a beach dominated by the Viennese on the upper Adriatic, from the idyllic provincial countryside through the urban periphery and further, into the mega cities of this world, from the seedy underworld of Frankfurt through to the most colorful corners of the queer opera milieu, from auspicious Manhattan through to magically trashy Graz.

Following the lead of Graz Year of Culture 2020, which in these days will be discussing visions of the urban future and ideas for the city of tomorrow, Sehnsucht 2020 – City and Desire inquires into mutual historical foundations, and searches for possible clues and answers on the movie screen. The historical special offers the rare chance to see works from the Austrian film archives, some of which have been specially digitized and restored. 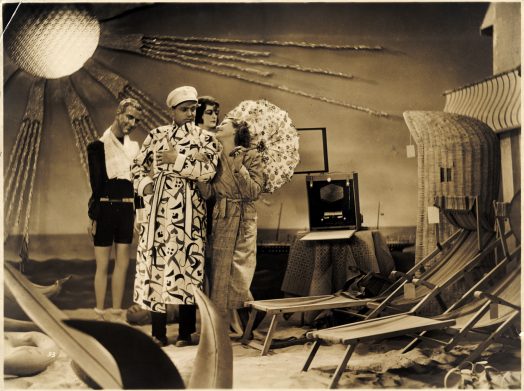 It’s not far from the city (railway) into the cinema. Historical analogies between city and film abound. For example, between the flow of images through the film projector and the segmented view of building fronts swiftly passing by that passengers catch through the window of the city railway. Also, the aspect of anonymity seems equally appreciated by city dwellers and cinema goers alike: Both enjoy being alone, together. Furthermore, movie theaters and cinemas entice with distraction and pleasure – a promise of happiness that they share with the diverse stimulants of urban habitats. Cinema, film, and city – all symbolize fantasies and desires that are constantly in danger of topplin, all offer the chance to get lost in the enchanting scintillating lights. Behind them: a reality that is also, at times, dismal. These intersections are the starting point for numerous confrontations with the congenialities of city and film – in this case, the Austrian ones. Sehnsucht 2020 – City and Desire tells of strollers and city dwellers. Of those who moved from the provinces to the city to start a new life. Of those who become disappointed when this very promise of happiness becomes their downfall in the moloch of the metropolis.

On social and architectural structures

The historical special’s tale begins with early film pearls – two new specially prepared restorations from Filmarchiv Austria: Sonnenstrahl (D: Paul Fejos, AT 1933), a turbulent comedy of errors, and Sehnsucht 202 (D: Max Neufeld, DE/AT 1932), a public housing story, revolve around the interwar period shaped by social tensions and rifts. Aspects of eroding solidarity run through the entire program, as does a confrontation with one’s cultural identity. The very question of a worthwhile way of living, is also ultimately posed by the young adults in two works by Barbara Albert: Sonnenflecken (AT 1988) and her cult film Nordrand (AT 1999), which shortly before the turn of the millennium, exemplarily represents the emergence mounted by a new generation of Austrian filmmakers. Already a year before Nordrand, director Michael Glawogger was drawn to the Megacities (AT 1998) of our planet for his iconic documentary. A lot of political debates were influenced by the buzzword globalization back then, which also linked regional challenges and geopolitical issues. In his long-term documentary observation Der Traum der bleibt (AT 1996), Leopold Lummerstorfer traces the worries, desires, and hopes of the inhabitants of Vienna’s Trabrenngründe housing estate. This opus magnum, one of Austria’s most remarkable documentaries, can also be seen again after many years – as can an early ORF report by Robert Dornhelm on youth gangs in the then brand-new Großfeldsiedlung housing estate. The recently deceased artist and filmmaker Gustav Deutsch thwarts these official recordings made for the public broadcasting service. His first film (Jugendzentrum Per-Albin-Hansson-Siedlung Ost, AT 1977) is a valuable, private documentary on the youth center at the Per-Albin-Hansson housing estate and the era’s sociopolitical concepts for dealing with young people. Meanwhile, in 1986, Rene Brueger asked young people in Styria about their desires for Losgelassen – Jugend in Graz.

Where the city takes its holiday
Or: Happiness is so close (and far away)

The film program for Sehnsucht 2020 – City and Desire also shows sites where a little happiness resides. The park pool in Linz, for example, promises entry to paradise, for 3 euros, 20 cents: Eintritt zum Paradies um 3€20 (D: Edith Stauber, AT 2008). Whereas the legendary ORF television producer Bernhard Frankfurter followed traveling urbanites to the northern Adriatic in the 1970s and 1980s (Wie Sand am Meer – Familiennotizen aus Urlaub und Alltag, AT 1976) – symbolic of summertime distraction and a brief respite from the workaday world. The city is considered a site of densification and also a space to pass through: a reference to mobility and diversity as core features of urban environments. Martina Kudláček’s exceptional portrait of photographer and filmmaker Alexander Hammid (Aimless Walk – Alexander Hammid, AT/CZ 1996) is characterized by fast-paced observations, minor details, and a precise eye that catches the apparently incidental. Born in Linz in 1907 as Alexander Hackenschmied, Hammid ultimately made his way first to Prague, and then to New York. Martina Kudláček’s portrait is a vivid urban story, in which during subway rides through Manhattan, what are probably the most iconic images of the city surface. Resonating in the recordings is Hammid’s first film made in 1930. Bezúčelná procházka (Aimless Walk – Spaziergang ins Blaue) (CZ 1930), filmed in the heyday of Prague’s film avant-garde and before Hammid’s emigration, is likewise part of the historical special. In 2020, we also meet again with the classic rascal Hanno Pöschl – also beyond the country’s borders: What brought the Viennese underworld king Johnny to Germany in Frankfurt Kaiserstraße (D: Roger Fritz, BRD 1981) – who knows? The gem Frankfurt Kaiserstraße will be screened together with the piercing Prince of Peace (AT 1993) by Hans Scheugl.

Rarities and hitherto rarely screened works, such as the quaint advertising clip Magic Graz (AT 1972) by the recently deceased Styrian film director Curt M. Faudon and his cameraman Max Vrecer, which attempts to heap praise on Styria along the lines of the then current political zeitgeist, between cultural heritage and rebellion, tradition and avant-garde, balancing Jazz, Spielberg, and Lodenjanker, meets media-reflective avant-garde films, such as Friederike Pezold’s Canale Grande (AT 1983). The program also includes two filmmakers Sasha Pirker and Lotte Schreiber who in their films frequently follow the line of thought that the city is always two things: the physical, built architectural space, as well as a mentality made up of perceptions, life styles, and ideologies – that is, the city as society.