The Diagonale Film Festival can look back at a manifold history.

The roots of the festival reach back to the year 1977, when the “Austrian Film Days” took place in Velden and it was dedicated solely to contemporary Austrian filmmaking. After a brief interlude in Kapfenberg from 1978 to 1982, the “Austrian Film Days” were then held in Wels from 1984 to 1996. Periodically coinciding with this event (1993-95) was another Austrian film festival held in Salzburg, bearing the name “Diagonale.” The Diagonale, as it is known today, first took place in Graz in 1998 under the management of Christine Dollhofer and Constantin Wulff. In its first years in Graz, there were approximately one hundred films shown in various program features and three categories of awards: A main award, an award for innovative film and a young talent award. A series of additional awards were later added. In 2000, after two successful years, the Diagonale became a protest platform for Austrian filmmakers against the Black-Blue Coalition. The festival aired a special series of films under the slogan “The art of the hour is resistance,” and the festival’s catalog served to voice the filmmakers’ call for the governing party to step down. 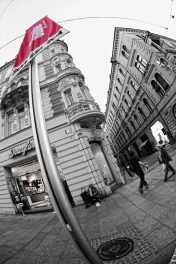 Ultimately, it was the period leading up to the Diagonale 2004 that was most turbulent in its history: By the end of the Diagonale 2003, the contracts were up for Dollhofer and Wulff. The festival’s advisory committee appointed Christine Dollhofer as director (Wulff’s contract was not renewed at his own request) for the next two festivals and informed the Federal Chancellor’s Office. The Chancellery’s State Secretary for Art and Media subsequently informed the Diagonale that beginning in 2004 a request for tender was planned for the artistic and commercial directorships of the festival.

In spite of the outstanding work of the previous program organizers, and without seeking the consent of the filmmakers, the Federal Chancellor’s Office appointed Tillmann Fuchs as commercial director and Miroljub Vuckovic as artistic director in May 2003. This decision was followed by months of resistance on the part of the filmmakers, a resistance composed of the “original” Diagonale members and ultimately coalescing into a counter-festival, the so-called “Morakonale.” When the alternative Diagonale group succeeded in winning over a large portion of the previous sponsors and securing crucial funding, the resignation of the two directors appointed by Franz Morak soon followed in December 2003. The “original” Diagonale was reorganized by the Association of Austrian Film and took place in Graz on March 3-7, 2004.

In the course of restructuring, and upon the recommendation of the Diagonale advisory committee, a three-person management team was appointed in April 2004: Birgit Flos (Director), Robert Buchschwenter (Production Manager) and Georg Tillner (Finance Manager). Following the resignation of Buchschwenter and Tillner, Oliver Testor took over commercial management of the festival until 2009. In December 2006, Birgit Flos’ contract was extended until 2008. Since 2006 there have been two important Diagonale awards with equal prize money, one for Best Film, the other for Best Documentary Film. In 2007, the Diagonale celebrated its 10th anniversary in Graz with a series of special programs and events.

Since June 2008, curator, publicist and film agent Barbara Pichler has been running the festival and has furnished it with a tighter program and a pronounced focus on international sector networking as a platform for mediation and discussion of Austrian film in a European context. The Diagonale Board has extended her initial three-year contract twice until the year 2015.