Fuchs im Bau (AT 2020), the new feature film by director Arman T. Riahi, will open the Diagonale’21. The Festival of Austrian Film is planned as a live event and will take place following a strict Covid-19 safety concept from June 8 to 13 in Graz. On opening night, the drama inspired by Wolfgang Riebniger’s experiences as a special-needs teacher at the Vienna-Josefstadt penitentiary will be shown in two successive screenings on the country’s largest screen, in the Helmut List Halle. Fuchs im Bau celebrates its Austrian premiere at the Diagonale’21.

Fuchs im Bau, situated in the atmosphere of a prison school, presents an entirely different tonality from the award-winning director of the successful comedy Die Migrantigen (The Migrumpies, AT 2017): While the character sketches in his celebrated anti-integration parable were deliberately polarizing, in Fuchs im Bau, a much more nuanced spectrum of themes unfolds, which, bearing in mind the scope of the conflicts dealt with, also allows conclusions about the inner structures of society. Fuchs im Bau is a film that exposes the weaknesses of the prison and working conditions in the penitentiary system and in doing so, foregoes classical black-and-white schemata: An emphatic film about courage, coming of age, and the power of education under difficult conditions. With Aleksandar Petrović, Maria Hofstätter (Grand Diagonale Acting Prize 2013), Andreas Lust, Sibel Kekilli, Karl Fischer, and many more, Fuchs im Bau is carried by an impressive ensemble, which together with the young actors around Luna Jordan – who are to be singled out for their immense acting – combines to a grandiose cast. Mario Minichmayr’s precise and agile camera as well as the impulsive soundtrack by Karwan Marouf are among the further features of the film for which Golden Girls Film (Arash T. Riahi and Karin C. Berger) takes responsibility.

The brushes are counted, the classroom more sparse than inspiring. And nonetheless, the prison school is perhaps the only place at which the juvenile offenders can at least temporarily think of something else in the midst of their triste everyday lives. Elisabeth Berger (Maria Hofstätter) runs the ship here with unconventional methods: Spelling and mathematics are not her top priorities. Instead, she prefers to encounter the rebellious prisoners with quick wit and unallowed excursions to the prison kitchen. When the teacher Hannes Fuchs (Aleksandar Petrović) begins his job here, he first has to grapple with Berger, who doesn’t want to surrender the field to the new teacher without a fight, especially, since under his supervision, a sexual assault occurs involving the sixteen-year-old Samira, which ends in a fight and ultimately solitary confinement for the youth, assumed to be a girl. Gradually, Fuchs gains the trust of the introverted prisoner. Gradually, also trauma from his own past breaks fresh ground.

„How a society deals with those who have rejected it, allows perhaps the soundest conclusions about itself. Arman T. Riahi turns his focus to the closed – in the truest sense of the word – world of juvenile prisoners and in doing so, expands the gaze we cast on ourselves. Fuchs im Bau is a porous, multiply permeable chamber- and genre-play along the lines of coming of age under difficult conditions. Indebted to major prison film role models, precisely staged, and with a terrific cast, Riahi encounters the milieu shown not only with understanding, but mainly with reason: empathic, illuminative, and – keeping in mind the scope of the conflicts dealt with in society as a whole – anything but inhibited.“
— Sebastian Höglinger und Peter Schernhuber, Festival Directors

Arman T. Riahi has already been awarded the Diagonale’s Audience Prize twice: for his documentaries Schwarzkopf (AT 2011) and Kinders (AT 2016), realized together with his brother Arash T. Riahi. 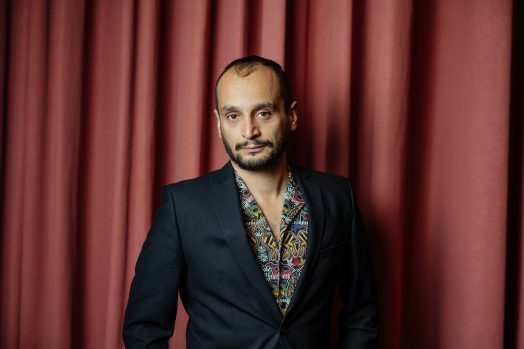 Arman T. Riahi was born in Iran in 1981 and grew up in Vienna, where he made his first short films as a schoolboy. He studied media technology and worked as a graphic and screen designer in London and Vienna. Since 2005, Riahi has been working as a freelance director and screenwriter.